Change: The Willingness To Think Differently 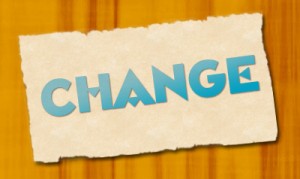 The Willingness to Think Differently   Post written by Leo Babauta.

I can summarize the most successful people I’ve ever known with one trait: the willingness to challenge mainstream ideas.

This has been the key to everything good in my life too:

And there are many more examples, but you get the point.

This isn’t a post to brag about all of that — it’s to share what I believe is a real key to life: the willingness to think differently than most people.

Most people take the safe route, because they’re afraid of being different and failing. If you do nothing amazing but you go with the crowd, then you don’t look stupid. But then you miss out on the amazing.

If you never stand out from the crowd, you will always be average. And that’s fine, but the people who stand out are the ones who make a mark, who innovate and discover, who learn the freedom of exploration and invention.

If you stand out when you apply for a job, you’ll be more likely to be noticed. If you don’t, and you play it safe, then they’ll likely ignore you.

If you stand out when you start a business, people will be curious and check you out. If you’re just one of many businesses doing the same thing, why should others care about you? Why should they choose you?

And yet, most people play it safe:

These are just some examples — our need to play it safe turns up in every part of our lives.

When you hear an idea that’s different than what you’re used to, pause. Instead of rejecting it outright, consider it — is there some merit? What are the arguments, the evidence?

Let go of the emotions that come up, the defensiveness. When I mention the cruelty in meat and eggs and dairy and leather and wool (even the “humanely” raised animal products), for example, people become defensive and angry. They cover their eyes and ears, so they can go on doing what feels comfortable. They lash out and attack. And yet, if you set aside those emotions, and look at the arguments, you might learn to think differently — and that applies to all ideas, not just veganism.

When you are told that this is the way to do things, take a second look. Is this really the best way? Are there other possibilities? If no one has thought of them, can you?

Just because an idea is different, don’t just accept it. Look at the bulk of the evidence, and learn to spot flaws in reasoning. For example, there is a school of people who believe that soy is bad for you, saturated fat (animal fat) is good for you, we should all drink raw milk, slather butter on everything (the Weston A. Price Foundation). This is different than mainstream science, but it’s wrong. The bulk of the evidence is against what they believe, and their reasoning is wrong.

Test out different ideas. Just because most people don’t do it, doesn’t mean it’s wrong. They might all be wrong, and this might be better. No better way to find out than to test it. If it’s not a good idea, drop it and move on.

Learn to be proud of your ability to test things that people traditionally believe in, and not to worry so much if you stand out. In fact, learn to see standing out as good — not just to stand out, but to forge new ground, to challenge ideas, to express your individual voice rather than blending in.

(Sherry Lowry has been a long-time subscriber and supporter of Leo Babauta’s writings and ability to commit to his goals.)